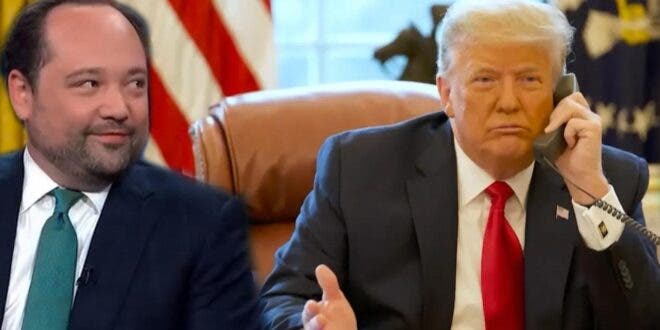 Scott interviews Philip Rucker, co-author of the New York Times bestselling book “I Alone Can Fix It: Donald Trump’s Catastrophic Final Year” with his Washington Post colleague, Carol Leonnig, which details the ex-president’s willful dereliction of duty. Their book opens at the very beginning of 2020 when the COVID pandemic arrives, carries through the January 6, 2021 insurrection, and ends with Joe Biden’s inauguration 14 days later.

The book includes material from 140 sources, including cabinet members, senior administration officials, advisors, and a bizarre interview with Trump himself. “I Alone Can Fix It” gives readers a thorough behind-the-scenes look at Trump’s handling of the final year of his presidency.

Philip talks to Scott about Trump’s reaction to January 6th and how Mike Pence fulfilled the President’s duties that day.

In this interview, Scott discusses the highlights of some of Rucker’s work and asks probing questions about the reception of this crucial information to voters.

“Vice President Pence was on the phone with the Pentagon to make sure the National Guard were on the way and to make sure troops were coming to the Capitol to help secure it and to assist the Capitol Police, who were obviously seized and beleaguered,” the Pulitzer Prize-winning journalist explained. “Pence was the one who fulfilled those presidential duties that day, in large part because Trump was AWOL. He was too busy watching the television.”

“He was fixated on November 3rd and making sure that he would be popular. And so at every turn during the coronavirus response.” Rucker told Scott about the one guiding principle for the former POTUS throughout the pandemic. “Trump was making decisions based on politics, not based on science or how to save lives, or how to level with the American people, but based on how to help himself politically. And that’s not our opinion. That’s the judgment of the people who worked with Trump in leading the response.”

Philip Rucker is the senior Washington correspondent at The Washington Post and led its coverage of President Trump and his administration as White House Bureau chief. He and a team of Post reporters won the Pulitzer Prize and George Polk Award for their reporting on Russia’s interference in the 2016 presidential election.

Rucker joined the Post in 2005 and previously has covered Congress, the Obama White House, and the 2012 and 2016 presidential campaigns. He is an on-air political analyst for NBC News and MSNBC and graduated from Yale University with a degree in history.

This interview was originally recorded in July 2021. This post uses affiliate links.