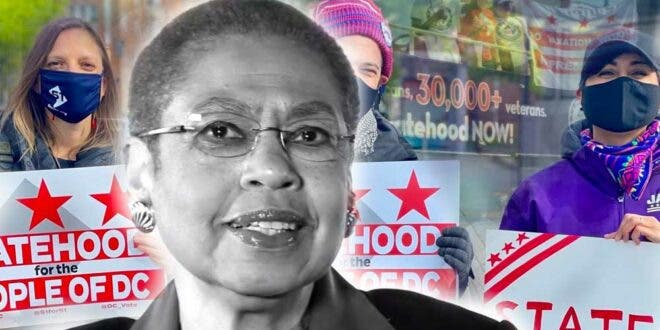 Scott speaks with Representative Eleanor Holmes Norton, the House delegate from Washington, D.C. She is here to discuss the momentous drive for D.C. statehood to admit Washington, Douglass Commonwealth as a state, and her bill the DC Admission Act. It passed the House in a historic vote, only to meet with opposition on constitutional grounds, but her office just released a legal memo backed by 39 top law professors including Harvard’s Lawrence Tribe that sets the record straight, and she says puts the issue to rest.

Rep. Norton says it’s going to require a national movement to admit the state. That’s where your help and help from The Resistance could be crucial in writing to your Senators across America to ask them to vote for DC statehood because residents of the District of Columbia don’t have Senate representation so they need people across the country to contact their Senators today in support of her bill. They can call: (202) 224-3121.

“People not living in DC perhaps can be the most helpful,” says Rep. Elanor Norton Holmes, “they could write their senators in particular and ask their senators to support DC statehood.”

“I want to call to your attention to the fact that the Democrats now control the Senate,” she says, “and the majority leader has said there will be a hearing on DC statehood this year.”

Here’s a copy of the letter: