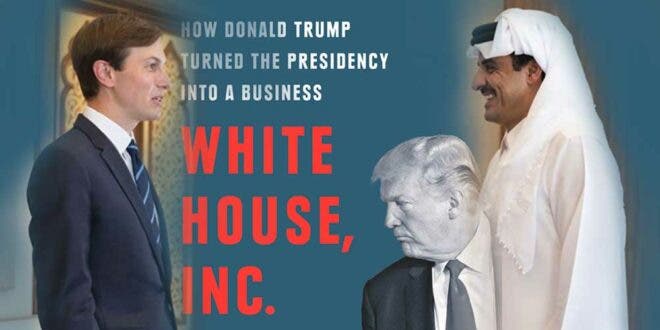 Scott presents an interview with Producer Grant Stern and Forbes editor and author Dan Alexander whose new book “White House Inc.: How Donald Trump turned the Presidency into a business” exposes the business ties that sent foreign cash directly into the hands of President Trump. While the Trump Administration is rife with apparent conflicts of interest, this interview focuses on the ties that Alexander uncovered exclusively between the gas-rich Persian Gulf nation of Qatar and the entire Trump family.

He told us about Trump’s son-in-law Jared Kushner who consummated a billion-dollar “bailout” deal with Qatar for a Manhattan skyscraper that had massive debt problems by using indirect means. Congress just opened an investigation into Kushner’s ties to Qatar and this interview with Dan Alexander doesn’t just present some of his book’s stunning conclusions, but it also explains why conflicts of interest in high-ranking government officials pose a danger to American interests.

Here’s a consolidated excerpt of this podcast with Dan Alexander from the interview about Donald Trump’s previously secret payments from the nation-state of Qatar:

And so what I wanted to do is figure out where all that money is actually coming from. And so I went through, property by property, and looked to try to see who the tenants were. And I found a document that was sorta like the ‘Holy Grail’ that I’ve been missing, that listed all of the tenants inside Trump’s two hardest-to-access buildings, which were 1290 Avenue of the Americas in New York City and 555 California Street in San Francisco. These are actually Donald Trump’s two most valuable buildings in his entire portfolio, and they have a lot of tenants paying a lot of money.

I saw on this document that one of the tenants was the Qatar Investment Authority, and my eyes popped out of my head because I never heard of this! The Qatar Investment Authority is a sovereign wealth fund that basically acts as an arm of the Qatari government. So, if you were to picture a tenant who would be a problem for a president to have, one of the top five names that you would come up with would be the Qatar investments.

So I had to try to figure out, okay, is this real is what this document says, right? And so I booked a trip to California, and I knew that they were supposed to be on the 43rd floor and as much as security in the bottom of the building, and there are different elevator banks, and so on. I think it was on the 49th floor. There was a coworking space. That rents offices to people who need to use them for a day or a week or whatever So, this was in December of last year, to be clear. So, so I, I book a desk here and at this kind of working space and I get past the security that way. And I take the elevator down a few flights and the 43rd floor. And I didn’t know what I was going to see the elevator doors open.

I take a left and before me is like this beautiful office space, you know, glass walls. [There are] these beautiful, pristine, gray couches that are decorated with red pillows and a nice looking countertop on the right side, two computers where receptionists can sit. And beyond them, it said Qatar Investment Authority on the wall. And I was like, wow, this really is happening. But the strangest thing, what was it?

There was no one there!

At the reception desk behind the glass, there was no one in their conference rooms that have glass walls. I could see through into a lot of the office. I walked to other entrances. There was no one in other parts of the office. I knocked as hard as I could. They were glass doors. I didn’t want to break them, but I knocked as hard as I could without breath, without threatening the break. No one answered. I ended up coming back the next day at a different time, thinking, you know, maybe their hours are just strange. The same thing, nobody answered. Then, your mind starts connecting the dots:

Here is a foreign government leasing space in Donald Trump’s most valuable building.

No one knows about it.

And there doesn’t seem to be any clear business purpose for this lease, but we do know that it connects a foreign government to the White House.”